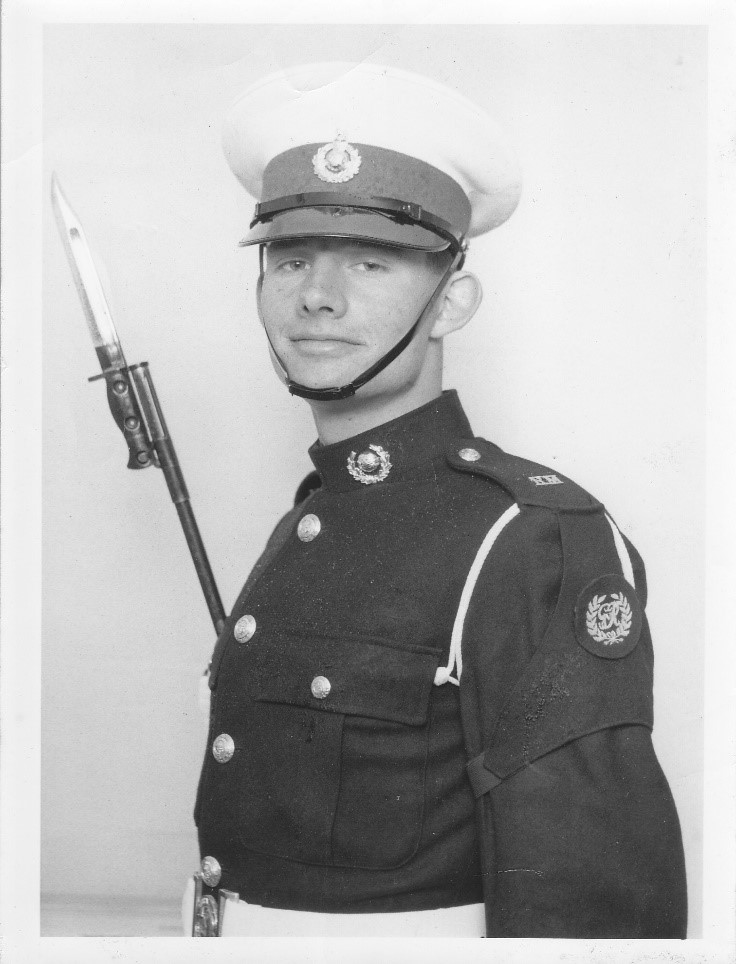 Andy Shaw joined the Royal Marines in 1976 aged 22, after being at sea for 6 years in the merchant navy and the deep-sea fishing industry.
After completing commando training he joined Four Five Commando and saw service in North Norway, Denmark, the Italian Alps, as embarked forces at sea, various UK-based exercises, and Northern Ireland.
In 1980 he was commissioned as a Second Lieutenant Royal Marines and returned to Four Five Commando. After the Falklands War Andy guarded Britain’s nuclear deterrent, trained recruits, underwent more arduous training himself, served in 40 Commando, trained the Army’s Senior NCO’s at Brecon, the Corps’ Young Officers at Lympstone, before finally serving in Four Two Commando on his last draft, as a company commander.
Prior to the Falklands War Andy’s career was steadily climbing and his prospects were good. Afterwards, it went in the opposite direction and reached the point of suicide in 1989. He struggled to cope with his increasingly irrational and wild emotions until he finally accepted that he could no longer handle the life he was living.
Andy left the service in 1996 and went to sea with his second wife, Cheralie, to seek the answers to his many problems. It was in the Spanish Balearic Islands that he found them.
In 2009 he sold his ketch “My Fair Lady” and he and Cheralie came ashore, after 18 years afloat, in Ibiza, where they now live today.
On the 6th of September 2012 Andy returned to Four Five Commando to give a unit presentation entitled “My war and its effects”. That night he had a queue of young commandos wanting to share their experiences in Iraq and Afghanistan with him.
That was when the idea of The Mountain Way was born.
Andy is one of just five men in the 356 year history of the Royal Marines to be awarded both the Kings Badge and Royal Marine Officer’s Sword of Honour. He also holds a GOC’s Commendation for work in Northern Ireland.

Dave O’Connor MBE was expelled from Fleetwood Grammar School at 15 and sent to a boys correction school in Lancashire from which he was expelled. At the age of 16 he joined the Royal Marines and conducted 9 months training. After successful completion of training he was sent to 45 Commando X Ray Company.
Dave spent a total of 30 years in the Royal Marines seeing active service in Northern Ireland and the Falkland Islands (where he was citated for the Military Medal). He also conducted two tours with the United Nations. One in Cambodia where he was a United Nations Military Observer living for 7 months in the jungle on the Ton Le Sap. The other spanning over 3 years serving in Bosnia as the military adviser for 845 Naval Air Squadron.
Dave became a Warrant Officer and his last position was as the Corps Master Coach for the Royal Navy and Royal Marines. Dave was the National shooting champion, two times Queens Medalist at Bisley and the Great Britain Shooting Team Captain. After leaving the Royal Marines he worked for Sheikh Mohammed bin Zayed Al Nahyan in Abu Dhabi for 7 years and during that time he learnt to speak Arabic and make many Muslim friends.
Dave was a Royal Marines boxer and is a Brazilian Jiu Jitsu Instructor. He loves motorbikes.